WHAT’S A MONEY BLOCK (AND DO I HAVE ANY?) 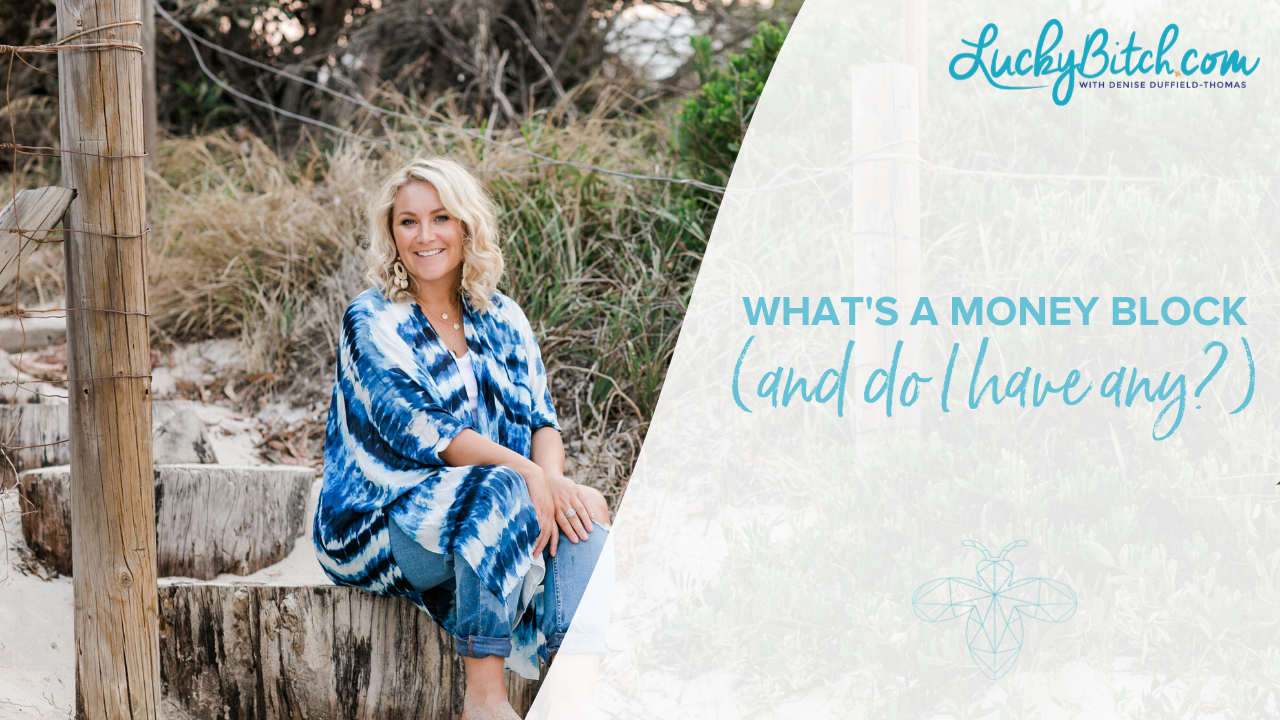 If you haven’t been in the Lucky Bee community for long you might not have heard the term “money blocks” before.

The concept of money blocks is strange because on the surface, why wouldn’t we want to make more money? It’s weird when you think about it.

Plus, even if you think you know about money blocks, the bad news is that you can never entirely get rid of them. They’re with you for life. That’s why you have to be vigilant and constantly work on them.

Then there are questions like how do you know if you have them? And what do you actually do about them? (Hint: there’s an awesome free audio class at the end of this post that will help!)

So if you’ve been feeling blocked or conflicted about money and you don’t know why, today’s post will provide a great refresher for you.

Sometimes you just have to go back to basics.

What exactly are money blocks anyway?

In my Get Rich, Lucky Bitch! book, I describe a money block as “anything that holds you back from making the money you want.” This is usually an underlying belief or fear about money. You may or may not be aware of it, but it’s there.

Sometimes it’s a completely hidden story that sabotages you in sneaky ways.

It’s wayyyy too easy to think that you don’t make enough money because of something outside of yourself. You know, things like your clients being broke, the economy, Mercury Retrograde, or any other random excuse.

Now, don’t get me wrong: there are external factors that can TOTALLY affect what you earn now. But believing that you can’t do anything about those factors and start earning more is purely an inside job.

Just make sure that your “excuses” aren’t money blocks (spoiler alert: they totally are!) No excuse can stand in your way.

See? Those external factors might be 100% real, but the idea that they control what you earn is just a money block.

How do you know if you have money blocks?

I’m going to go out on a limb here and say, “Trust me. You have them.”

Why am I so sure of that? Because everyone does.

I don’t know a single entrepreneur – even the mega-successful, zillionaire ones – who don’t still deal with some form of money blocks. And yep, that totally includes me, even though I teach this stuff.

You know that famous Jim Rohn quote about motivation being like showering? (i.e., it doesn’t last, so you have to do it daily.) Well, working on your money blocks is the same. Shifting your blocks isn’t a one-time thing.

In fact, every time you hit a new level in your business, you’re going to see the same freaking money blocks crop up. The good news is that you’ll start to recognize them – and deal with them – much more quickly each time.

Meanwhile, I want you to really get this idea. If you want more money, and it’s just not coming, my 99.9% certain diagnosis is “money blocks.”

The good news is that you can have money blocks but not let it derail you.

Why do we have money blocks?

A lot of women have an underlying fear that it’s not safe for us to be rich or successful (or both). Deep down, you probably have stories about how more money will lead to some negative outcomes.

That’s weird, right? On the surface, you think you want to make more… but then you have these conflicting feelings inside.

So really, it’s a protective mechanism that we think will save us from some perceived harm.

Most people have pretty similar money blocks. Honestly, you might think your situation is unique, but it’s probably not.

Here are some of the most common ones – see how many of them ring a bell for you:

Once you know your particular money block, you can keep an eye out for how it sabotages you.

For example – take the really common “I have to work hard to make money” one.

If you have this block, you’ll probably find that you actively sabotage yourself to make it a self-fulfilling prophecy. You might resist delegating so you have to do everything yourself, or you’ll procrastinate so you have to pull all-nighters to finish your work.

But when you catch yourself doing these destructive behaviors, you can stop in the moment and remember that it’s just your money blocks. You can control how you act in those situations.

How to stop struggling with your money blocks

Some Lucky Bees find that just identifying a money block is enough to dissolve it. It’s awesome when that happens… but some blocks can be a LOT more stubborn than others.

If you struggle with one that just refuses to shift, no matter how much you let it know you see it, I have the perfect solution. (And it’s totally free!)

A while ago, I created a free audio class to help female entrepreneurs clear their money blocks. It’ll walk you step-by-step through recognizing – and then dealing with – the seven most common entrepreneurial money blocks.

You can get it free today from densiedt.com/blocks

It’s your time, and you’re ready for the next step.