WHAT MONEY MESSAGE ARE YOU SENDING TO THE UNIVERSE? 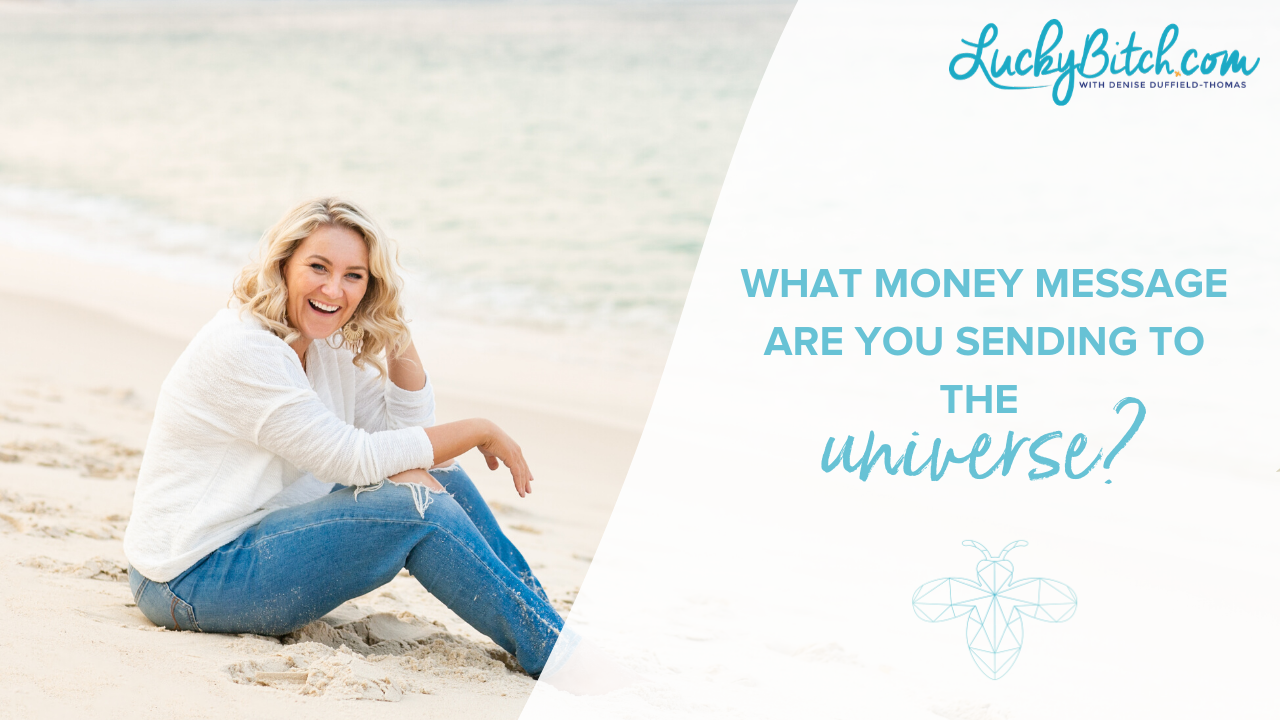 Years ago, I had many problems in accepting money. My income had stagnated at a certain level and I just could not break free. God it was frustrating. I didn't get it – I'm smart. I was good at my jobs. But my salary was the same (and actually went down) for years.

Although I went to many seminars about developing a millionaire mindset, in reality, I felt guilty spending even the smallest scrap of money on myself.

I only shopped at second hand shops, so my clothes always felt ill-fitted. I treated myself like a second class citizen. I read books about millionaires and dreamed about having a lot of money but I lived like a pauper. The message I was sending out was “I don’t deserve”. And that’s exactly what I got in return.

I dreamed about winning the lottery or getting some massive windfall, like an unknown wealthy relative leaving me a house or lots of money.

Lottery winners don’t have their problems solved overnight by their unexpected windfall because money doesn’t change you, in only enhances who you already are. If you fundamentally believe that being rich makes you a bad person, or if you think that it will solve all of your problems it doesn’t matter how much money you get.

According to NSW Lotteries, the odds of choosing all 6 winning numbers is approximately 8,145,060 to one, but here are some interesting statistics for you. Camelot Group who operate the UK lottery released a survey of their national lottery winners to show what affect winning the lottery had on their overall happiness and lifestyle.

What tells me is that money in itself doesn’t really change your life too much. If you struggled to lose weight before, money isn't going to change it. If you don’t know how to handle money energetically, you will always end up broke.

Sabotage will find you… even if you're famous

Being rich and famous isn’t enough to shield you from your money problems. Lindsay Lohan has estimated to have burned through eight million dollars of her acting income through wild partying, drugs and alcohol, holidays and luxury goods. She bought herself a luxury car and promptly crashed it, and she’s been forced to sell two properties which could have been a valuable nest egg if she decided to stop acting.

Reality stars Spencer Pratt and Heidi Montag had many “lucky” breaks and made millions from their shows and endorsement deals. They are now living rent-free at Spencer’s parents house and wondering what happened to all that money.

Anyone who has built a large fortune from scratch will tell you it took time and effort to build long-lasting wealth.

Elizabeth Taylor was famously the first woman to make one million dollars for a film role and according to reports, grew her fortune to close to one billion dollars, despite not starring in a movie since 1994 (The Flintstones!). Her White Diamonds perfume made close to seventy million dollars in 2010 alone and her jewellery collection was worth more than  one hundred and fifty million dollars. Liz had no trouble holding onto her wealth and obviously invested well.

Contrast that to other film stars who ended their final years in poverty having squandered entire fortunes. Marilyn Monroe, equally as famous as Elizabeth Taylor, although only 36 at the time of her death left very little in her will besides her house, clothes and personal effects. Would she have been able to amass a large personal fortune or would she have continued the same patterns?

Your money message to the Universe is how you think about money, how you treat it and how much you allow yourself to actually earn. You're constantly showing the Universe how to treat you.

The first step is acknowledging that you have a block to earning the type of money you want to earn. Look at those self-beliefs and recognise them as baseless fears.

My philosophy is "throw everything at it", meaning try everything you know. Mix it up and do a combination of practical and the metaphysical. Yes, visualise yourself as a millionaire, but also pay your bills on time and give people opportunities to give you money.

If you know you have HUGE blocks around receiving money and you KNOW you should be earning more, come and join my Money Bootcamp and upgrade your life to the next level.