7 SUCCESS HABITS THAT TOOK ME TO 7 FIGURES 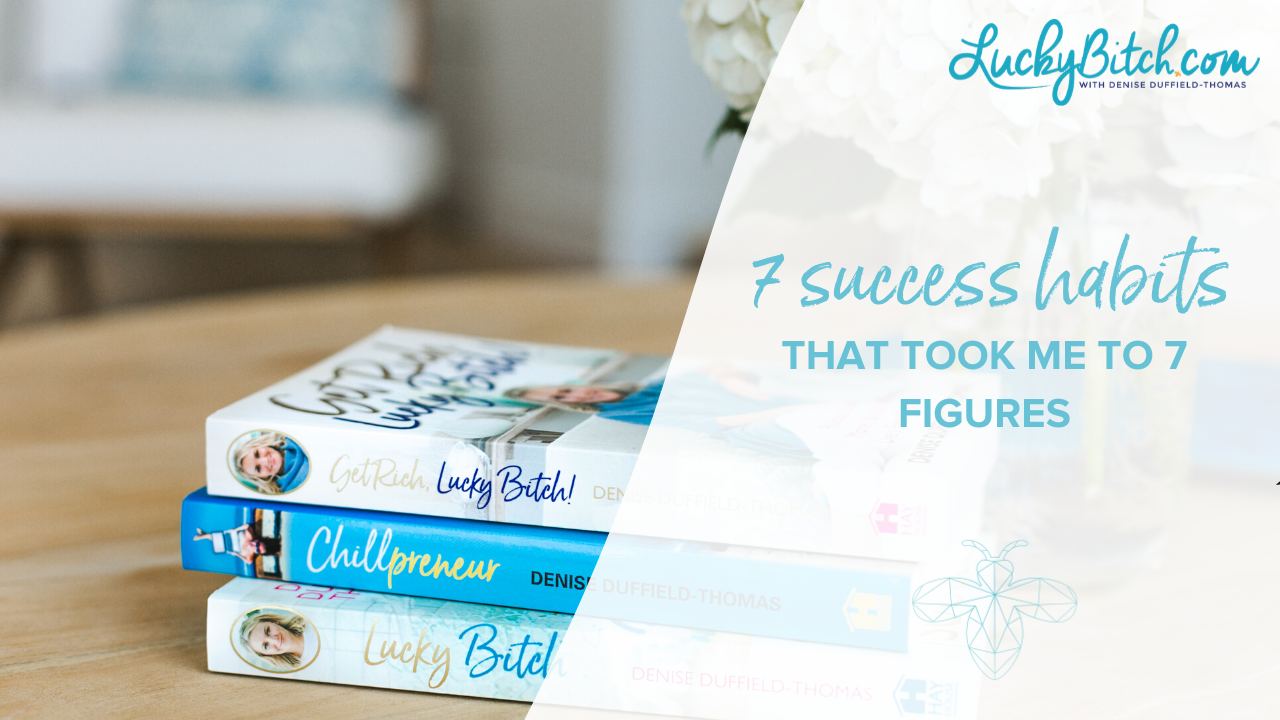 I’ve known that I wanted to create a million-dollar business pretty much forever – even before I had a business idea that had longevity. In my 20s I remember thinking “I want to be a millionaire by the time I’m 30,” and it took me until I was 35, but hey that’s not too bad!

There are certain success habits I’ve cultivated to get me to this level. And honestly, they are the same success habits that will take you from zero to earning that first couple of thousand in your business, and from there to earning six figures and beyond to seven figures.

The very first thing is that the basics work. It’s realizing that you can do the basics over and over again and stop searching for that silver-bullet solution.

You don’t need to find somebody else’s magic formula because really, I’ve created a million-dollar business from simply doing the basics. I’m always marketing and growing my business, and I don’t have any advanced strategies that you don’t already know or that you couldn’t read from a book or learn from a course.

The reason this is a success habit is because some people get really impatient with performing the basics – they can’t be bothered or they think it’s boring or too hard to do a blog post every week. Yeah, it can be, but this habit has helped me create a million-dollar business.

It’s still the same stuff I started out with six years ago: me in front of a camera talking to you. That’s all it is. Don’t feel like it has to be anymore complicated. Sure, I could get a slightly nicer set, and I thought about that this year. “Do I get a super-fancy set?” I lost my microphone recently and I thought, “Do I really want to stop making videos for a couple of weeks while I wait for my new microphone?” No, because the basics work.

Make sure you have the basics in place.

The second thing is to be consistent. I’m super-consistent in my business; you’ll get an email newsletter from me every single week and I’ve done this for six years now. That doesn’t just happen by accident. That’s a clear decision to be consistent. To date I have 30k plus people on my newsletter list (now 40k since we filmed this video), but the work is the same as when there were only a couple of hundred people on my newsletter list. It’s only grown through consistency. Showing up, every single week.

Here’s a tip: when I started out and I didn’t have that many people on my list, I sent out my newsletter telling myself, “Somebody is waiting for this information. Somebody really needs to hear this right now.”

Years later, people say “I wait for your newsletter to come in because I read it every single week.”

I manifested that years before it happened. Consistency is such an amazing habit for every entrepreneur, and it really is how you’re going to take things to the next level.

The other part of this is that I haven’t changed my business model all that much over the years. I do see some people change every couple of months. They change their focus all the time and it’s really confusing for your audience if they don’t know how they can rely on you.

You know that when you visit my website you can read about money, mindset or marketing. That’s pretty much all I talk about. I don’t try to go in other directions. But that’s not saying I haven’t in the past. There were times in my business where I could have gone into spinoffs like Get Hitched Lucky Bitch, for example, which was my soulmate book, and my attracting a soulmate course. I invested a lot of money into creating the book, then I thought “Hang on, This isn’t consistent with my brand. This is not how I want to be.”

Yep, my third key to success is about simplicity.

Keep things very simple in your business model, and be very clear on how people can work with you, because that is going to grow your business to the next level. If you’re too broad or trying to be everything to everyone, it won’t give you the clarity and focus that money likes.

Consciously make decisions in your business, and don’t be swayed too much by other people’s opinions. Your audience might say, “Hey you should do this,” and you think, “Oh maybe I should.” It’s easy to get off track.

I’ll give you a perfect example of this. When I created my Money Tracking App, I realized that even though it was a cool thing to do, it wasn’t a project that I really wanted to focus on.

I decided to give it away for free rather than charge for it, and I did this for strategic reasons. Basically, my business model isn’t about making two bucks here and there. Honestly, I’m not interested; I’m either free or very expensive.

I had a whole bunch of people say “Well what about us Androiders? Why can’t we get the App?” And I said, “I’m really sorry, I don’t want to create it.”

End of story. People kept asking, “But are you going to do it in the future?” But instead of saying, “Well, maybe” or feeling bad about it, I just said “It doesn’t fit with my strategy right now. I’m sorry, but it’s not going to happen.”

Making clear decisions based on your values and business model is really important. This could be anything for you. It could simply be making really conscious decisions about who you work with, who you partner with, what events you speak at, or what Facebook groups you join.

Being deliberate about those decisions has really helped me cultivate the mindset of “I’m going to the next level, and I’m not going to be distracted by shiny objects or other people’s opinions about what I should do.”

5. Surround Yourself with Like-Minded People

A huge part of my success is that I’ve surrounded myself with like-minded women who also want to have a seven-figure business. A couple of years ago, I was invited into a mastermind with somebody who was a little bit ahead of me in business; she was creating a group of women who wanted to go to seven figures and beyond. I was totally intimidated but I knew it was a symbolic next step.

Surrounding yourself with people who are going where you want to go is so important, because you start to believe it can happen to you too. You see other people doing it and you hear about their real struggles. And this comes back to my first point: you see that they’re just normal people doing the basics over and over again.

A perfect example of this is that I went to a conference and one of the speakers had a ten-million-dollar-a-year business.

He said, “Let me show you my entire strategy.” I thought “I practice that strategy already. Oh this must be the basic bit and then he’s going to go on to the advanced stuff.” Then he said, “That’s it. That’s what I do.”

That’s when I realized that, first of all, there aren’t any really advanced strategies. Also when you’re in those situations, you see that the people who are making the money you aspire to make are just normal people who are following the basics. They are being super-consistent, and keeping things very simple in their business. They make clear, conscious decisions about what they’re going to do. They’re not trying to be everything to everyone. And they’re surrounding themselves with like-minded people.

When you look at people whose businesses you admire, it’s tempting to put them on a pedestal and think, “It’s alright for them because they…”

I used to think, “Oh she’s really skinny so it’s easy for her to be successful in business because she’s skinny and I’m not.”

Whatever your excuses are, you have to banish them and ask yourself: why not me? Even with all my skills, talents, insecurities and flaws. Just ask: why not?  Realize that you can be a role model for other people if you get out of your own way.

7. Work on Your Money Blocks

The last success habit that has helped me get to six figures, then to seven figures is working on my money blocks. Constantly.

You might think that you get to a certain level in business and you don’t have money blocks anymore, but it’s not true. Money itself doesn’t make you happy and money doesn’t solve money blocks.

It makes me laugh thinking about it, because my mastermind buddies and I are constantly working on ourselves. That’s how we’ve become successful. By having the mindset that there’s always more to learn and always more to uncover about ourselves.

There are always more ways to improve, so I work on my money blocks all the time. I work on old recurring money blocks – things that have come up for me again and again (for example – that you have to work hard to make money)

I work on new money blocks that come up when I hit the next stage in my business. I constantly work on myself and deal with my fears and insecurities around being in business. It’s a process of continuous learning and development.

If you are still new to the money blocks conversation, or think that you’ve hit a wall with working on your money blocks, then guess what, you haven’t.

If you haven’t listened to my free money blocks audio, make sure you do it today.

I talk about seven common money blocks that women have in business. You might think this is just for beginners, but it’s not. Usually when you have a money block, you have it for the rest of your business life. You just have to work on it in different ways because it will come up again and again.

So make sure you carve out a little bit of time today to listen to that free audio class.

It’s your time and you’re totally ready for that next step.