CAN YOU BE RICH AND SPIRITUAL? 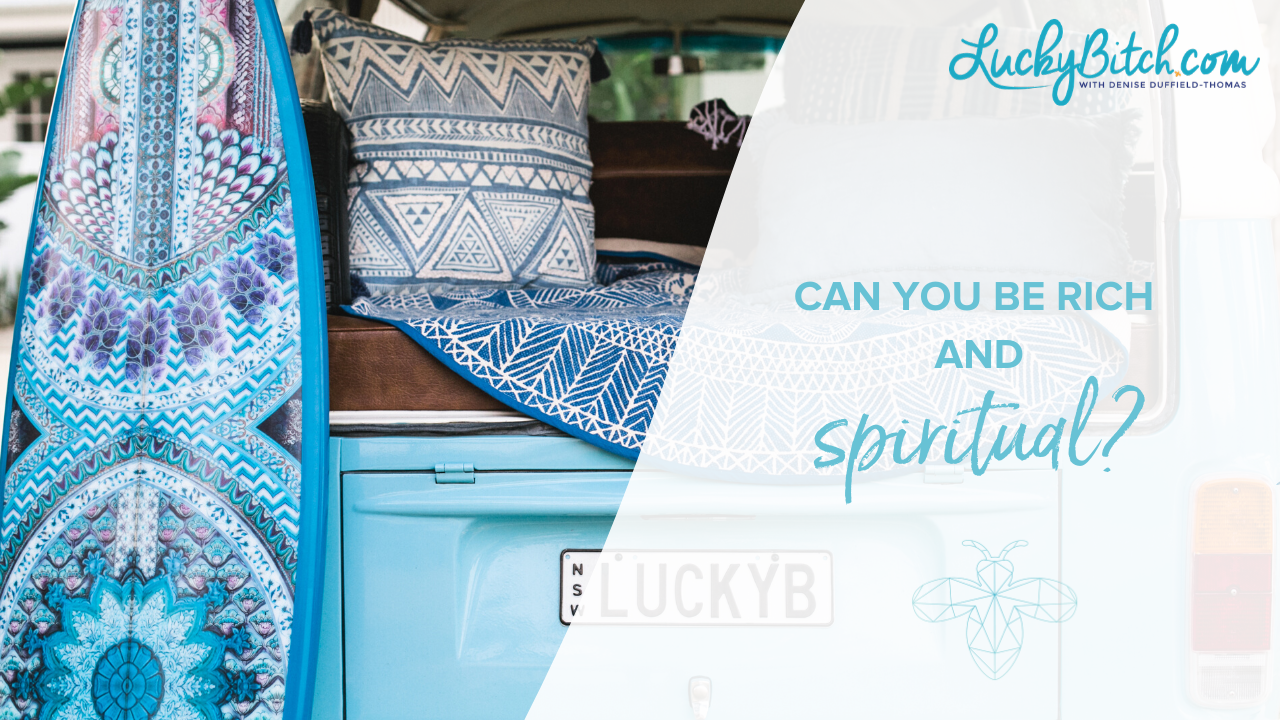 Today, we’re looking at a mindset issue that’s so fundamental, many of us don’t even think about questioning it.

It’s the idea that you can either be rich OR spiritual – but never both.

In reality, you can be any kind of rich person you want. You just need to declutter the assumptions about being wealthy that so often create money blocks, and then decide who you want to be.

(Not quite sure who that is? Check the link at the end of this post for an awesome free meditation that will help you figure that out.)

Ready to blow your assumptions about being rich out of the water? Let’s do this!

Where does the “rich OR spiritual” idea come from?

You know, gorgeous, there are a lot of really beautiful spiritual traditions out there. Most of them have awesome things to say about treating your fellow human beings with love and respect and dealing with life’s inevitable ups-and-downs.

When it comes to money though, things often start getting confused.

You probably know the old bible chestnut about the love of money being the root of all evil. And then there’s the one about it being easier for a camel to go through the eye of a needle than for a rich man to enter heaven.

It’s not just Christianity either. The Prophet Muhammad once claimed that poverty was his pride. Buddha said that living a pure, unselfish life meant not owning anything at all. And the ancient Greek philosopher Epictetus insisted that contentment came from wanting very little, rather than from being wealthy.

Wow. With 2,000+ years of messages like those, it’s no wonder so many of us think we can’t be rich and spiritual at the same time.

It’s not what you’ve got, it’s what you do with it!

Look, girlfriend, I’m not a religious studies scholar. But I suspect that if you looked at each of those quotes in context (and in their original language), the meaning might change a bit.

I mean, yes, sure, if you walk all over people to build a fortune without caring who you hurt, that’s pretty unspiritual.

And then, once you have it if you just focus on getting more in ways that destroy the planet and create widespread suffering? Yep, again: pretty damn unspiritual.

Now, I’m not saying that rich people like that don’t exist.

But can we please take a step back and acknowledge that that’s just ONE scenario for getting and spending money? What about all the amazing socially conscious philanthropists who’ve used their money to do amazing work in the world?

The truth is that money doesn’t change the person you are in your heart.

Instead, it allows you to be more of whoever you already are.

It’s time to ditch the “either/or”

Like I said back in the intro, you can be any kind of rich person you want to be. First, though, you need to declutter all the damaging assumptions you’ve picked up about “the way wealthy people have to be”.

Here’s a quick, practical exercise that’ll help you to do that.

What kind of rich person do YOU want to be?

Once you’ve ditched all those harmful assumptions, it’s time to figure out what the beautiful, spiritual, RICH version of you would be like.

Close your eyes and imagine the person you’d love to become if you had unlimited money. Who would you help with all that money? What causes would you donate to? Where would you volunteer your time or services?

Imagine a day in your life as a spiritual rich person in wild, technicolor detail.