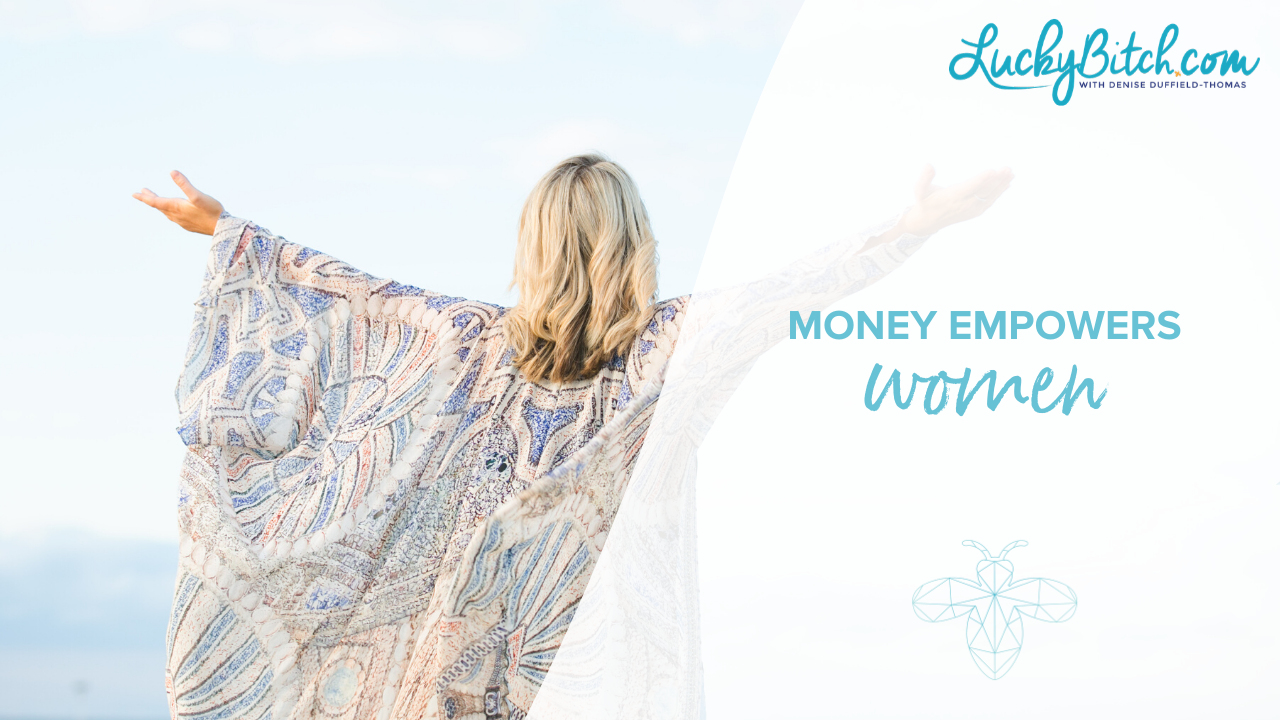 I was wondering the other day, how much collective wealth the Lucky Bee community has created, pretty much out of thin air, since we’ve been doing this money work.Honestly – I think it’s in the millions by now.I don’t directly claim credit… obviously! But I like to think I’ve played a small part. Either by encouraging you to raise your prices, have better money boundaries, have courage to put yourself out there, upgrade your lifestyle and pay better attention to the abundance in your life.That’s why I mentioned last week that I’m so proud of us. We literally ARE changing the world. We’re playing a part in a huge revolution… money empowers women.(There are MANY revolutions going on in the world at the moment, around race, marriage equality, etc. All extremely important.)This one is around female empowerment.By creating products and services that wouldn’t exist otherwise. By hiring other women to support us in our businesses. By inspiring our clients to upgrade THEIR standards and change their lives. By creating lives and businesses that are flexible, so we can have kids if we want, or travel if we want – or just CHOOSE who we spend time with.

I’ve had two conversations lately that really made me think.First, someone asked me to speak to a women’s shelter on money. I felt like I really SHOULD do it. I felt guilty for saying no.Now – I think this is a REALLY worthy cause. Hugely important work.But I’m not the person to do it. Just because I speak on money, does not mean that I’m the right person to speak at a women’s shelter. Not good for me (I would feel helpless that I couldn’t affect real change in an hour), and definitely not good for them.

Never forget – it’s okay to change the world YOUR way. We women don’t have to be everything to everyone.The second conversation happened a while back. I donated a chunk of money to someone who does amazing work in her community, and she said afterwards, “I wish I could donate money like you, but all I have to give is my time.”The heartbreaking thing is that I was thinking the opposite, “I wish I could have a big heart like you and help out directly, but all I have to give is my money.”Both of us had this guilty feeling like it wasn’t really enough. But it was perfect. Every cause needs both time and money. Some people have both to give. Sometimes you have more of one than the other.It’s okay to serve in the only way you can (or want to). It’s okay to serve in a way that’s easy and enjoyable for you. It’s okay to charge well for a very specific thing you do.You are enough. You don’t have to be everything to everyone.You are enough.Recently on the blog, I spoke about being the most expensive in your industry. Should you be?It’s okay if you are.It’s okay if you’re not.Either way, it doesn’t say anything about you as a person.

But it brings up stuff for us, right?! Because we’re women and we want to help everyone.

On a related topic,  I read recently that tennis player Andy Murray has a female coach, former world number one Amelie Mauresmo, and he said he was shocked at the response he’s had from his peers and the press.

I was very surprised at the amount of criticism she received for each loss I had. I couldn’t believe the negativity towards her personally. That has never happened with any other coach I’ve worked with before. It was a shock.

We were having a discussion recently in my Lucky Bitch Money Bootcamp about more female speakers at conferences and why women are so reluctant to put themselves forward.

My response was that in my experience, when I’ve seen women speak at male dominated events, they haven’t been well received. They are rated lower, perceived to have spoken on “softer topics” than fellow male speakers and I’ve watched them really not deliver a powerful performance (not EVERY woman – some handle it fine, others are unnerved by it)

And honestly – the reaction that Andy has received really confirms it. Some men just don’t respect women’s voices and impact – and that’s why I stick to largely female audiences. I feel good in that environment. I don’t feel like I have as much to prove.

The Internet Marketing industry can be definitely sexist. I’ve been virtually patted on the head with condescension from guys who treat me like I’ve got a neighborhood lemonade stand instead of an incredibly successful business.

I don’t know what the answer is to be honest but I’m happy to have made that decision to work with women only (I know a few guys read my book and newsletter – about 5%).

After watching the trailer for the “Suffragette” movie today about how women got the vote through sweat and tears – it makes me even more passionate about how business and money can empower women to make our own choices.

So inspiring. Thank you for making it possible for us to even have this conversation.

It’s not my fight to become a female executive – those board rooms don’t interest me. I applaud women who do that though! I can support that work without being directly involved in it.

Remember – you don’t have to be everything to everyone – pick a part of female empowerment and focus on that – whether it’s to get more women on stage, or help women grow their businesses, or lobby, or legislate, or role model or support other people making change.

We all have a part to play in this.