HOW TO TALK TO KIDS ABOUT MONEY 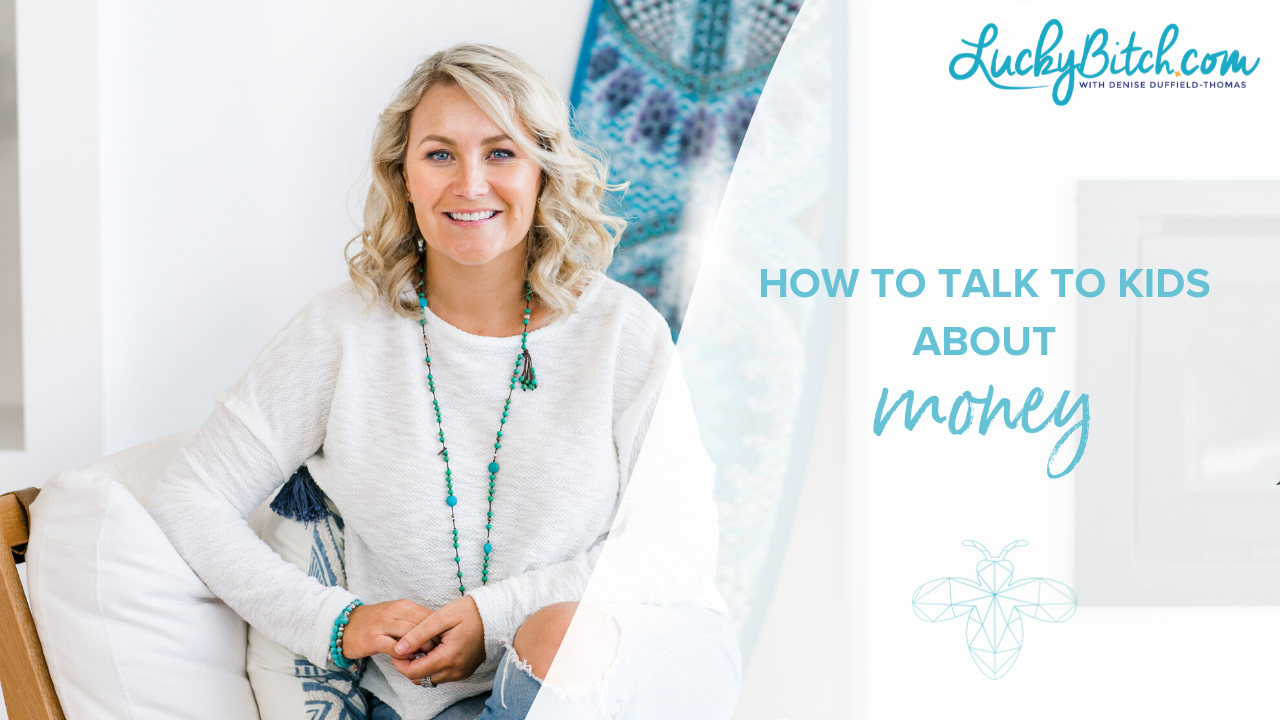 As that song goes, the children are our future…

So how do we talk to this next generation around money and success so that they can have a good money mindset?

I think this is a really important one for the Lucky Bee community to talk about whether or not you have kids, because we are all influencing this next generation and that generation is going to have a huge impact on the planet.

So let’s get right into it, how do you talk to your kids about money?

Lucky Bitch Video Transcript – How to Talk to Kids About Money

I have one child. I know that is not a big enough sample size. However I might not be an expert in kids and money but I work with thousands of women around the world on their money blocks, and guess what? Most of them started in their childhood.

So if you are wondering how to talk to your kids around money that is a really great place to start. Start with your own childhood and think about the money memories that your parents gave you, both positive and negative.

What are some of the things that they said about money? What decisions have you made as an adult based on what they said around money?

Let me give you an example, a lot of parents said things like, “Money doesn’t grow on trees.” or, “You have to work really hard to make money.”

Hearing that can really influence you as an adult in your business because every time things get a little bit too easy or success is coming a little bit faster than you thought it would you are going to subconsciously put the brakes on that, and you might sabotage your business just to slow things down a little bit because you want to live that truth, unconsciously, that it’s hard to make money.

“There are money making opportunities all around us.”

Maybe you show them examples of entrepreneurs who are making money in different ways or creative ways and constantly ask them what their money making ideas are.

Kids have got great ideas and just to set that expectation up that they can make money out of their own originality, out of their own creativity and, yes, a little bit of elbow grease but making money doesn’t have to be hard.

It could be that you help them practice discernment and choice.

It could be that, “Our family, we don’t spend money on things like that” if it’s something that it’s against your values. Or it could be, like my friend Marisa from Beautifully Organized (bit of a plug there), she said that when her kids ask for something she says, “That’s great! Let’s put it on your birthday list. Let’s put it on your Christmas list.” So her kids never hear, “No, we can’t afford it.” It’s like that’s a great idea but it helps them I guess practice that delayed gratification and it still gets them excited about it but without the “we can’t afford it.”

Now another one that can be kind of interesting is that thing of like, “When we’re rich…” and I thought about this a lot because sometimes it’s really good to create that, create that picture together as a family but I was thinking what a better one around that, instead of saying, “When we are rich…” Or, please don’t say this, “When we win the lottery…”

Instead how about we just to get kids excited about why they are rich now, like put some gratitude in place.

I think that can be really difficult sometimes because kids want what they want and it can be really tricky if you don’t have the money for it, but maybe it’s getting them into a practice of gratitude like:

Then get them into that practice of gratitude which will really serve them as adults as well.

So, I want to hear from you…

What are some of the things that your parents said around to money? How is that making you talk to your own kids around money?

What are some of the things, tips and tricks, that you have for other parents?

This is such an important conversation and I think we really can influence this next generation to have such a healthy different feel around money than we did, especially our girls but definitely our boys as well.

Have a lucky day!