HOW PERFECTIONISM IS KEEPING YOU BROKE 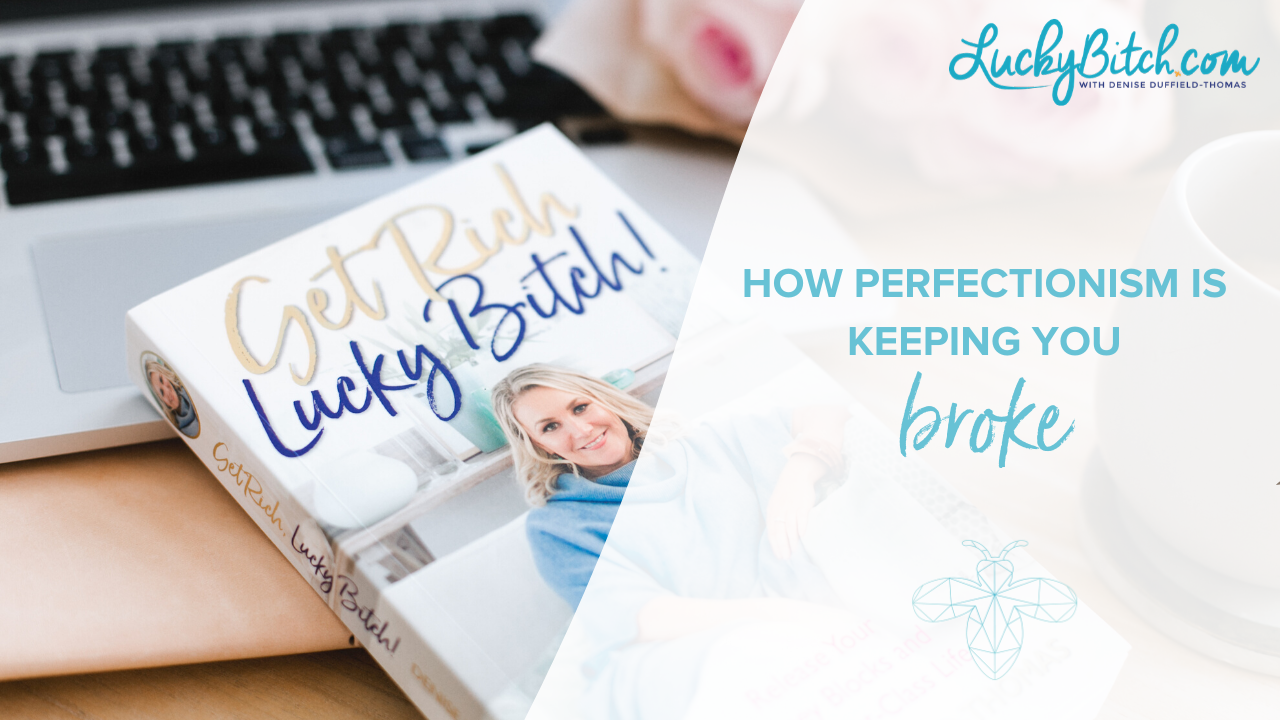 Sometimes I’m running around town in my flip flops and unwashed hair, thinking “I hope I don’t run into anyone I know – they’ll think I’m not the Rich, Lucky Bitch after all! They’ll think my whole business is a lie!”

I make vastly more money than I did several years ago, but I haven’t changed that much on the outside.

The truth is – I’m not particularly well groomed.

I don’t care about wearing makeup most days and I’ve …  been known to skimp on the showers. This was NOT the image I had of my future self. When I was struggling financially and feeling miserable in my little apartment,

I often thought ahead to my ideal life as a successful business woman. When I commuted in the cold to a job I didn’t like, I imagined what life would be like with more money.

I just KNEW that my life would be perfect.

I would be immaculately groomed. I’d only wear designer clothes.

I’d totally figure out all the secrets of a perfectly coordinated wardrobe. I’d be organised, efficient and never ever procrastinate on Facebook. My office would always be tidy. I’d be super kind to everyone. Make time to learn new hobbies and just generally be perfect.

Basically – all the things I’m not.

Of course, now I sometimes think ahead to when I’m a millionaire and think the same thing.

Well – of course, THEN I’ll be perfect!

How Perfectionism Is Keeping You Broke

There’s a problem with that kind of thinking. It’s not realistic or even necessary, in order to be rich.

Remember – millionaires still worry about money some days. Billionaires still poop just like everyone else. Some still struggle with their weight, get divorced and generally lead the same kind of lives as anyone.

The difference? They just have more money! Are you delaying your flow of abundance because you’re romanticising it too much?

I think this is more of a female thing than a male thing. We need to justify and deserve everything that comes to us. We are so super critical of ourselves that we think we should fundamentally change before the Universe rewards us.

My desk is often really messy. Mark would tease me and say “Is this the desk of a millionaire?“. I felt really bad about it, until I saw a photo gallery of the desks of famous people. Some were incredibly neat, others were messy as hell. There was literally no correlation between neatness and wealth.

Then I realised – having a messy desk won’t prevent you from being rich. If you were messy before, you’ll be messy after – it’s just personality! You don’t have to give up or perfect any part of yourself to be rich (except your mindset).

Give yourself permission to be exactly as you are – AND RICH.

Don’t put rich or successful people on a pedestal and think they’re perfect.

Find mentors who admit their faults and give you behind the scenes of how their businesses really work.

Unfortunately, some “gurus” of the personal development industry love to show a glossy exterior to the world, live beyond their means to show off or exaggerate their lifestyle.

This perpetuates the myth of the perfect life.

The thing is – you don’t need to be perfect to be rich. In fact, you’ll still be YOU – just a richer version of you. Your fundamental personality won’t change at all. I’ll tell you how mine has changed over the last three years. I’m still the same person, but not everything has remained the same.

I’m much pickier about the people I hang out with

I’m intolerant of people who overstep my boundaries

I’m MUCH clearer on my purpose in the world

I’m totally okay with saying no

I don’t give my time away for free

I’m not that bothered about people pleasing

Apart from that, I’m the same old gossip loving, book worm, messy and unkempt, introvert virgo I’ve always been. Everything else has just come with experience not money.

I don’t always remember to set my goals every day

I don’t have perfect thoughts all the time

I’m not perfect with money

If you think that current you and future richer you are completely separate then you’re delaying the future.

You could be PUSHING away your wealth with an underlying message of “I’m not worthy yet, Universe, come back later.”

If this is resonating, then congratulations! Awareness is the first step to give yourself permission to be richer NOW.

Even though I’m not perfect

Even though I have faults

Even though I (insert bad habit here)

Even though I’m not good with money

Even though I’m flawed

Even though I’m not ready yet

Even though I don’t deserve it yet

Even though my success has been a fluke

Even though I haven’t truly earnt it….

I deeply and completely love and accept myself as a rich and powerful woman NOW.

Enjoy the process of becoming more of who you truly are as you become wealthier!