CRITICISM WON’T KILL YOU (NO REALLY, IT WON’T) 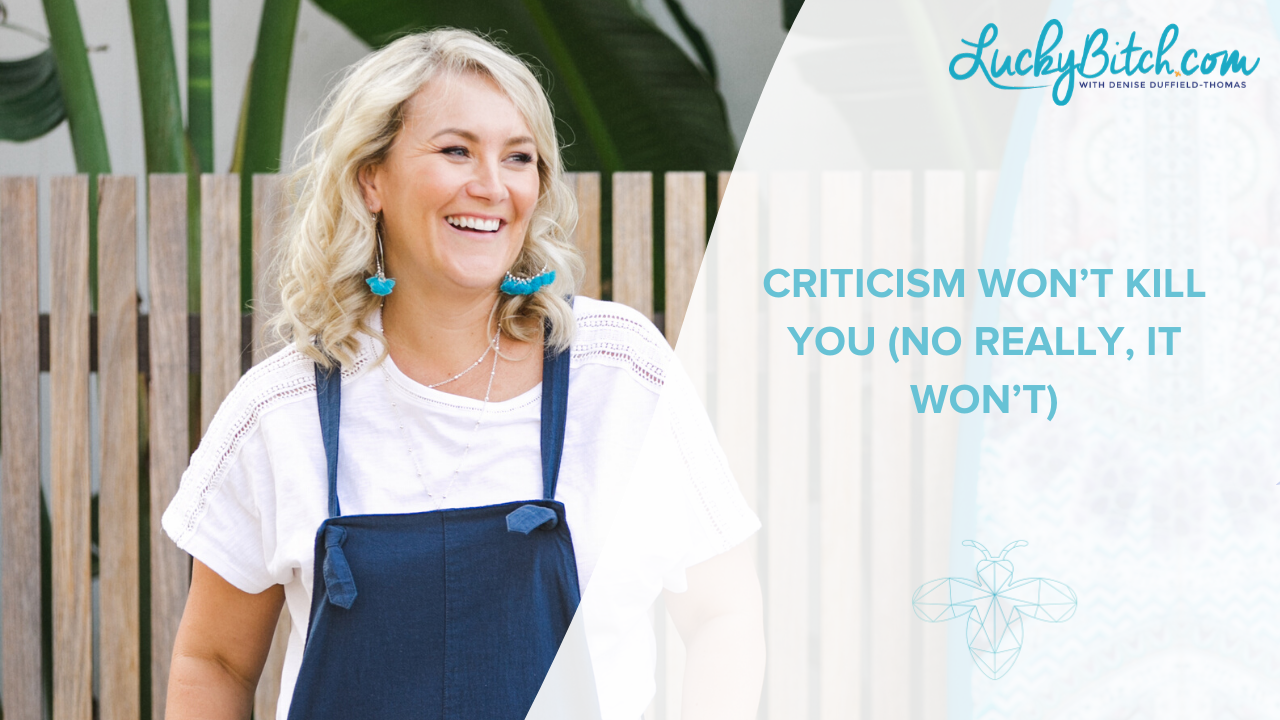 It’s said that people are more afraid of public speaking than of dying, but there’s a more destructive and crippling fear – the fear of being criticised.

This fear keeps you hostage and makes you give up your dreams. It keeps you awake at night with your stomach churning and causes you to play small in the world.

It especially affects entrepreneurs, writers, actors or anyone else in a creative profession. If you’ve ever set up a blog, then you probably understand the fear of being criticised online when you start sharing yourself publicly.

What if people don’t like what I have to say?

What if they think I’m stupid?

Especially in today’s society when online bullying is so rampant, any person who shares regularly on Facebook, Twitter, Youtube or a blog is bound to get some ill-intentioned or even downright nasty comments directed at them.

Fear of criticism can hold you back from starting a business you think is a great idea, writing that book that’s been keeping you awake at night or from making a big leap like changing careers.

Worrying about saying “no” to people in case they’ll think you’re a bitch?

Several coaching clients and friends have manuscripts lurking in their bottom drawers (you know who you are) but several have confessed to me “If I get a rejection letter, I’ll die“.

Criticism might suck but it will not kill you.

Yes, it might sting, but if you’re ever going to stretch yourself out of your comfort zone then you have to be able to armour yourself against some inevitable flack from other people.

When Mark and I won The Ultimate Job in the World competition, it put us in the public eye a lot more than we were used to. When we first won the competition, we had a barrage of negativity from the other contestants, their friends and family and a lot of complete strangers.

Strangely it didn’t bother me. I was just happy I was about to leave on a six month paid holiday testing out luxury honeymoon destinations. I ignored it all.

However halfway through the trip, the Guardian did a feature about me and a few of the negative comments really upset me.

What a load of do do.

If you can’t find anyone interesting to do this its OK to skip a week.

…its certainly an interesting “job” but a pointless folly especially if you blog on your environmental and carbon footprint concerns. Makes her look a bit of a hypocrite, and they are always intrinsically dull.

I really felt the pain, embarrassment and anger of it. I had to fight the urge to comment back and justify myself. The part about being boring or it being a superficial story was annoying, but the hypocrite comment really bothered me.

I was trying to compose the perfect response, the exact words that would make them realise they were wrong and I was right. I wanted them to see that I was a nice person dammit! I wanted them to like me.

It was the first time I’d really had any bad criticism since we won the competition and I thought I was immune to it, but I have to admit that it stung.

But, I didn’t die. I was pissed off, but nothing physically bad happened to me. My life continued on more or less the same. Yes, there were a few more people in the world who thought badly of me, but I survived.

I realised then that I could survive criticism. Nothing bad happened to me. I just let the feelings drift away and felt so empowered.

This is why myself and so many others shy away from putting ourselves and our work “out there” in the internet world. We’re so afraid that people will misconstrue what we’re doing, make us feel stupid or worthless or worse – think we’re “bad people”.

But they are just jealous!

Bad people make nasty comments, but so do otherwise “nice” people. Writing it off as jealousy from an evil person sets up a sense of better than / less than and makes you feel like people are out to get you for your success.

This may be the case. To be honest, I don’t think that most people think that much about others, especially strangers. They could be just letting off steam, had a bad day, or just made a snap judgement and couldn’t help themselves from ranting. Either way, it’s their problem – not yours.

Put it this way – have you ever been reading a magazine and saw a picture of a celebrity with no makeup on or wearing a terrible dress and said something really horrible about them? Maybe you’ve commented on a story online or written a strongly worded letter of complaint to a restaurant or newspaper.

Does it make you a bad person for disagreeing with someone or having an odd bitchy moment? No, you don’t think anything of it. You just vented or made an idle nasty comment. You don’t think of them as a real person with feelings, do you?

If you can disengage yourself from the criticism and just see it for what it is – absolute meaningless rubbish – then you can move on and achieve whatever you want to without worrying about other people’s random opinions.

Does that sound like denial? No – I call it self-preservation. Why should you let someone’s ill-informed, heated word-vomit ruin your day?

Hilariously, many friends feel it’s their duty to try and defend me online. I’ve seen many comments like “If you actually knew Denise….”. I think that’s sweet, but it’s also pointless. If someone tells me there is some negative stuff online – I just ignore it and don’t read it anymore.

Consider it a sign of success that you’re generating buzz. Don’t obsess over it or spend hours Googling yourself – it’s not healthy and you can use that energy for living your life beautifully.

What if you DESERVE the criticism?!

As hard as this sounds, sometimes there can be truth to criticism. If you’re constantly being told that you miss deadlines, that you are late to meet friends, that you’re unreliable or if customers are constantly bitching about you then take a good honest look and ask yourself if there’s any truth it in.

Yes it can hurt admitting that you’re wrong, but take it as useful feedback and acknowledge it. People will be less likely to bitch behind your back if you’re truthful about your shortcomings and say sorry if you need to.

What goes around comes around. If you’re being nasty online to others, then chances are it will come back to you eventually.

I try very hard not to say anything bad or mean online, because I know what it’s like to be on the receiving end of it.

If you don’t have anything nice to say, just button your lip! That doesn’t mean I don’t bitch anymore – I just say it to my husband instead of writing it online.

Get into a habit of blessing people who annoy you, or wish other people luck, even if you’re feeling jealous. Say to yourself “good things are happening to me too”… and they will!

Get excited about criticism

Am I mad? How can you get excited about something that hurts so badly and makes you want to throw up?

I’m writing book proposals at the moment and I’ve sent out six query letters to agents. So far I’ve received one rejection letter. It was nicely worded and I didn’t feel bad about it. In fact, I emailed Mark and said:

I know that if I want to publish a book, I probably have to send out dozens if not hundreds of query letters and book proposals and every rejection is another step on along the road.

Could you reframe criticism as a measure of success? Would you be willing to get excited about every rejection as one step closer to your goal?

Because it’s such a classic and we should all read it daily, please remind yourself of the beautiful words of Marianne Williamson:

“Our deepest fear is not that we are inadequate. Our deepest fear is that we are powerful beyond measure. It is our light, not our darkness that most frightens us. We ask ourselves, Who am I to be brilliant, gorgeous, talented, fabulous? Actually, who are you not to be? You are a child of God. Your playing small does not serve the world. There is nothing enlightened about shrinking so that other people won’t feel insecure around you. We are all meant to shine, as children do. We were born to make manifest the glory of God that is within us. It’s not just in some of us; it’s in everyone. And as we let our own light shine, we unconsciously give other people permission to do the same. As we are liberated from our own fear, our presence automatically liberates others.”

Marianne Williamson, A Course in Miracles

What could you do if you let go of the fear of criticism?

What could you do if you felt the fear and did it anyway?

Tell me – if you could wave a magic wand over your fear of playing big in the world, what would you do with your life?