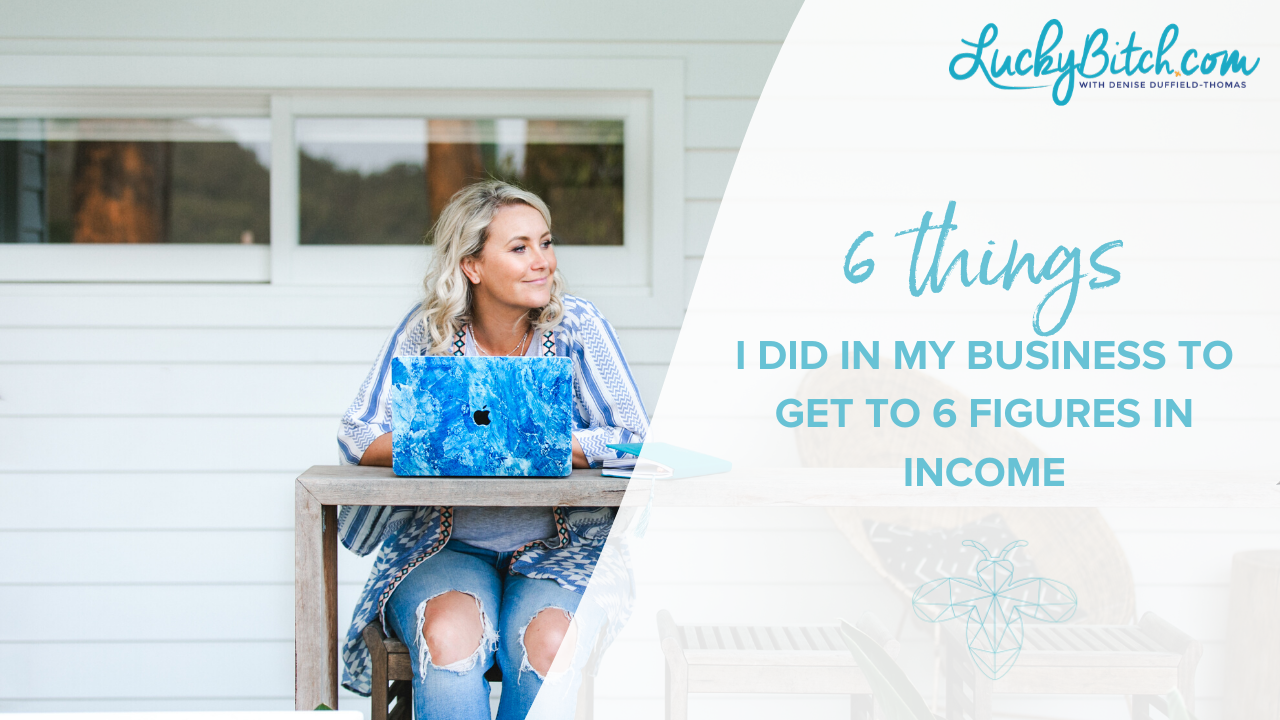 My business has been at the million-dollar mark for a couple of years now, but it’s pretty rare to get to that point overnight.

Right now, you might be aiming for the six-figure level and wondering if you’ll ever get there… or whether it’s a nice fantasy that’s just out of reach.

If so, today’s video is perfect for you!

I’m going to share the six biggest practical things I’ve done to take my business from earning $225 in its very first month, to six figures and beyond.

I’m also sharing a free webinar that’s going to help you shift the mindset issues that often come up when you aim for that kind of money.

Read to discover what it really takes to get to six figures, girlfriend?

A quick word on mindset before we start…

Commit to the long haul

Let me be totally honest: it took me almost five years to go from that first $225-month to earning a million dollars in a year. And I’d been seriously working on my mindset and marketing skills for at least a decade before that.

So no: I’m definitely not an overnight success. But I’m pretty certain that the six things I’m talking about today got me there wayyyyy faster than I would have otherwise achieved.

And if you do each of them too – for however long it takes – I’m pretty confident you’ll get eventually there as well.

#1 Focus on the money-making stuff

This sounds obvious but that doesn’t mean you’re doing it.

Look, girlfriend, I’m not telling you that you shouldn’t have a beautiful website, or sexy business cards to show off at networking events.

Both of those things are awesome; but focusing on them won’t get you to six figures.

I love my gorgeous LuckyBitch.com branding… but it came AFTER I’d started making big money in my business. If I’d invested in this stuff right at the beginning, I’d have wasted my money.

#2 Offer ONE thing to ONE target market

It took a while before I really, truly figured out my ideal client and stopped trying to be everything to everyone. And that’s okay: just like with offers, identifying what works for you is generally less about cosmic inspiration, and more about trial and error.

Back when I started, I’d happily speak to anyone about anything. I had a gazillion ideas for new products, and I really did work with anyone who wanted to hire me.

Eventually, though, I scaled it right back to ONE thing – money mindset – for ONE target market – female entrepreneurs.

This focus has meant that I’ve really built on my success every year, instead of constantly reinventing the wheel and confusing my audience.

#3 Get the right mastermind around you

Working on your own every day can be incredibly isolating – even if you’re a massive introvert like me.

That’s why finding a mastermind of other awesome women at the same business level as me, and with the same kind of ambitions has been a lifesaver.

It’s also why I strongly recommend connecting with like-minded women who want to hit six figures right along with you.

I’m a big believer that you teach people how to treat you. Making a ton of mistakes showed me that I needed to put really strong boundaries around EVERYTHING in my business, including:

That meant I took myself completely out of my inbox, and really protected my time.

Some of my boundaries might sound harsh, but I promise you: without them, I would’ve burnt out WAY before the six-figure mark.

#5 Focus on the next-plus-one income level

You know that saying “shoot for the stars and you might just hit the moon”? Well, that’s how my mindset around income goals works too.

Getting to six figures required me to clear all the blocks I had around earning SEVEN figures. And then, when I wrote out and visualized my ideal day, I imagined having a million-dollar business, not just a six-figure one.

Thinking beyond the goal is why I found it so much easier to go from six figures to seven than I did to make my first few thousand in my business.

Finally, gorgeous, let me state for the record that I’d never have made it to six figures – let alone my current seven – without a passive income generating product.

I had no idea when I created my Money Bootcamp that it was going to evolve into my signature course. I had even less idea that it would become the cornerstone of my business… but my very first passive income course was $50, and it led the way to leveraging my time, so I didn’t have to trade hours for dollars.

When you embrace the passive income mindset, you start to quickly realize how you can impact so many more people, and work way less.

So my advice is to focus on creating a passive income product sooner, rather than later.

To finish off, let me ask you a question…

Do you have conflicting feelings around creating more money in your business? Do you secretly think that a six-figure goal is a bit… wanky? Greedy? Cliched?

That’s a totally normal reaction. If you’re like most female entrepreneurs in the Lucky Bee community, you know that you want to make more money… but you also resist it like crazy.

I totally understand, and I’m here to help.

Are you ready for 2020 to be your best money year ever?

Great news – come to my next LIVE webinar!

If you want to embrace abundance and change the way you think and feel about money in 2020, then you need to make sure your belief and mindset are on point.

It’s your time, and you’re totally ready for the next step!